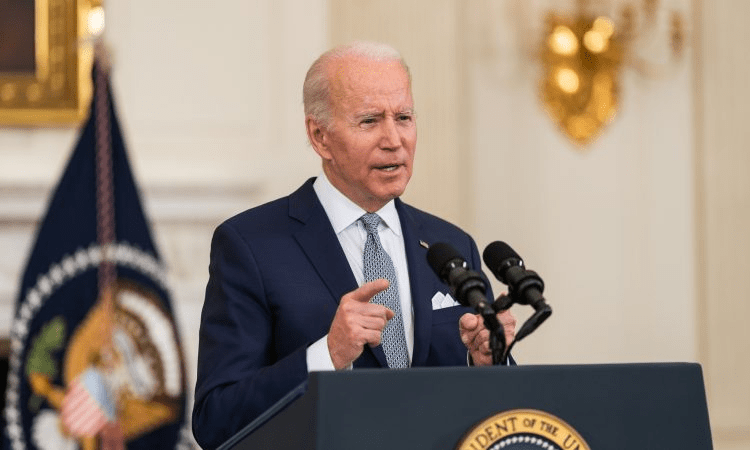 The flow of illegal immigrants, which has increased, is the result of his own policies. (The White House)

In response to a question about Latin America in his January 19 press conference, the first country Joe Biden mentioned was Guatemala. Everything Biden said regarding this pivotal ally was the opposite of the truth, with no shades of gray.

Biden said, “We’re having great difficulty making up for the mistakes that were made in the last four years.”

While he did not state Donald Trump’s mistakes, a look at illegal immigration into the United States under Trump and Biden discredits Biden’s statement as a lie. The flood of illegal immigrants, which spiked upon Biden taking office, is the direct result of his own policies.

When Trump took office, judges’ rulings constituted law that prevented the government from holding for more than 20 days people requesting asylum who traveled with minors. With Democrats refusing a legislative solution, Trump entered into an agreement with Guatemala that permitted processing asylum claims outside the United States.

Guatemala and its neighbors do not have persecution to justify refugee status. Migrants seek jobs and better wages. Democrats refer to migrants fleeing violence, but fleeing violence is not grounds for asylum. If it were, Canada would have to grant asylum to many people from US inner cities.

Economic migrants stopped coming once they knew they could not enter the United States with false asylum claims. One of Biden’s first acts in the White House was to cancel Trump’s agreements and return to processing asylum claims inside the United States. That was an open invitation for illegal immigration.

More than 1.3 million illegal migrants were taken into custody in Biden’s first nine months. That could amount to nearly 2 million for his first year. Nobody knows how many migrants entered the country undetected. It is likely much more. This cannot be an accident or incompetence. Biden is purposefully flooding the country with illegal immigrants.

Biden bragged in his presser he was able to “provide billions of dollars” to Guatemala and neighboring countries when he was vice president. Biden claims he helped mitigate migration. Instead, he increased it by using US money to impose criminal socialists on Guatemala’s government.

Biden traveled to Guatemala three times in 12 months to bludgeon Guatemala’s president to extend a UN anti-impunity commission (CICIG). At the third meeting, Guatemala’s president asked Biden not to make any public statement about the CICIG. Later that day according to the former president, Biden told the press “The CICIG is staying, period.” Compare that to Biden’s statement in the presser: “We don’t dictate what happens in any other part of this continent.”

Colluding with Vladimir Putin’s henchmen, the CICIG illegally jailed Russian refugee Igor Bitkov, his wife, and their daughter. The Prevention of Torture Office in Guatemala found that judges Erika Aifán and Yassmin Barrios, both recipients of State Department (DOS) Woman of Courage awards under Biden, had tortured Bitkov in preventive detention.

The CICIG was exposed in the United States in 2018 as criminal. The US Helsinki Commission held a hearing, and the Wall Street Journal and National Review linked the CICIG and Putin to persecution of the Bitkovs. Judicial Watch reported Colombian CICIG Commissioner Iván Velásquez was aligned with “the FARC, the violent Marxist guerrilla.”

Former US Ambassador to Guatemala Todd Robinson used the CICIG as a battering ram to control Guatemala’s Congress and impose his ally on its court of last resort. The court shut down businesses, persecuted political enemies, and protected allies, including the successors to the Fidel Castro-supported guerrilla. Biden rewarded Robinson in 2021 by appointing him head of the DOS’s counternarcotics division.

Even under Donald Trump, DOS enabled the high court to violate separation of powers and illegally intervene in executive and legislative branch functions. Trump was able to conclude his asylum agreement with Guatemala because the Guatemalan government, understanding DOS betrayal of Trump, circumvented it by having its minister of the interior deal directly with his counterpart, the secretary of homeland security.

Parallel to the asylum agreement, Trump and Guatemala agreed to a temporary worker program that would have permitted as many as 1 million Guatemalans to legally work in the United States and return to their country. This filled needs of both countries and would have significantly reduced illegal immigration into the United States. Biden canceled it last year.

In his presser, Biden referred to the “terribly dangerous trip” migrants make through Mexico. Women are raped; children suffer greatly; and migrants are indebted in perpetuity to criminal cartels. A temporary worker program would help avoid this, but Biden’s regime shamefully induces migrants to make the perilous journey to create what they believe will be new Democrat voters.

Several former Guatemalan officials who committed crimes are fugitives from justice under Biden regime protection in the United States. The regime must avoid discovery of DOS criminal activities in Guatemala.

The Biden regime constantly attacks Guatemala’s authorities, who are attempting to recover criminal justice from DOS control. Three days before Biden’s presser, DOS condemned Guatemala’s public prosecutor for filing criminal charges against Aifán. Aifán had illegally usurped Supreme Court authority by grabbing a case against a DOS ally to protect him from prosecution.

In protecting Aifán for an obvious crime, DOS acts as it is above the law and unaccountable, just as Biden did on January 19 with his blatant lies to the American people and the world.