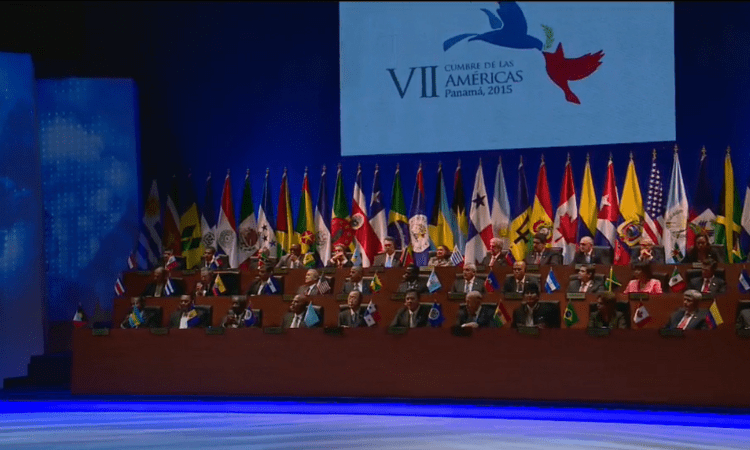 Joe and Jill Biden complained about unfavorable media coverage of the Summit of the Americas. (OAS)

The Biden team is not, as its lofty Summit of the Americas words claimed, trying to mitigate irregular migration; nor is it promoting investment and rule of law. The opposite is true, and the emperor is naked.

A master of misinformation, CNN said, “three Central American countries (El Salvador, Guatemala, and Honduras) the US has worked hard to cultivate, remained a visible sticking point. They refused to attend because Biden declined to extend invitations to the autocratic leaders of Cuba, Venezuela, and Nicaragua.”

CNN’s claim reflects either lying or incompetence. It is only true of Mexico, whose president is a friend of dictators, and Honduras, whose president is in office through support from Venezuela. The Guatemalan and Salvadoran presidents’ decision had nothing to do with the dictators’ absence.

Guatemalan President Alejandro Giammattei said he did not attend the summit because of US mistreatment of his country: “We are upset and hope the message of not attending will lead to a new page in bilateral relations, with respect for sovereignty and international law.”

Biden has grown accustomed to his media partners lying and suppressing truth on his behalf. However, the Biden teams’ incompetence and dishonesty were too much even for his shameless propagandists to completely spin.

In late April, Giammattei told interviewers that the US ambassador had been meeting with indigenous groups to depose his government. Giammattei later added that USAID promotes ethnic division in Guatemala. Such discrimination violates the Guatemalan Constitution, and ethnic division would make the country ungovernable.

While claiming to promote democracy, the Biden regime is trying to put criminal socialists in power. DOS illegally took control of criminal prosecution in Guatemala in 2010. It illegally added the court of last resort in 2016.

When that term ended in 2021, Guatemala’s authorities, having seen the disastrous results of politicized justice, resisted DOS pressure and did not appoint DOS’s preferred candidates. In 2021, Prosecutor General Consuelo Porras fired DOS’s key prosecutor for various crimes, of which there is much public evidence.

Having lost control of the criminal-justice system, DOS resorted to using US visa cancellations and sanctions to punish those who would not kneel before them. Porras let criminal charges against DOS-protected prosecutors and judges proceed. DOS then accused her of corruption and sanctioned her.

The Phony Fight against Corruption

DOS said Porras was protecting Giammattei’s corruption and that both were persecuting anti-corruption prosecutors and judges. Five days before reappointing Porras, Giammattei denounced the illegal pressures on him. He criticized those who had fled arrest warrants and the US for treating them as heroes. Giammattei said these were the most corrupt people in Guatemala and that the government has the proof.

Two days after lambasting Giammattei for reappointing Porras on May 16, Biden invited him to the Summit but failed to convince him to attend.

A nonprofit association that promotes rule of law issued a statement that the invitation would not fool the president nor Guatemalans. They will not forget DOS illegalities and the harm they did to the country.

Giammattei said, “We see a bipolar United States.” Homeland Security Secretary Alejandro Mayorkas and Biden have praised Guatemala for security and human-smuggling cooperation, respectively. On the other hand, there are continued US operations and allegations against the government.

DOS acknowledges Guatemala is a “multiparty constitutional republic” with “generally free and fair” elections. The rest of DOS’s human-rights report, though, defames Guatemala and gives the impression it is as bad as the three uninvited dictatorships. This contradiction reveals the duplicity of the Biden regime.

There is no contradiction between the Biden regime’s actions toward Cuba, Venezuela, and Nicaragua and its attack on Guatemala.

The regime recently lifted limits on remittances to Cuba. Considering about 75 percent of the money sent goes to the regime, the policy helps the dictators.

Juan Gonzalez, leader of Biden’s Latin America policy, went to Venezuela and met with Maduro to ask for petroleum. Biden could have obtained it by reversing his assault on domestic energy.

Giammattei described pressure on him not to approve a law making NGO activity transparent. He said developed countries have such laws and noted there was no such pressure on Nicaragua when it passed a similar law.

Biden’s people make harsh statements about the dictators, but their actions contradict their words. The same applies to Guatemala: Biden’s team talks about judicial independence, rule of law, and investment while doing everything to put Guatemala’s judicial system in the hands of criminal socialist agents and allies.

Like everything with the Biden regime, the summit was a false front, another lie to Americans. Biden’s policy politicizes justice in Latin America through polarization and destruction. This is also his policy for the United States.

Giammattei wants to inform the US Congress regarding the truth about Guatemala. He says now is the time for democratic allies to join forces, but real US leadership according to its stated principles is needed. Giammattei’s information helps our Congress and public better understand Biden’s agenda.