The Chief Obstacle to Guatemalan Prosperity
Skip to content 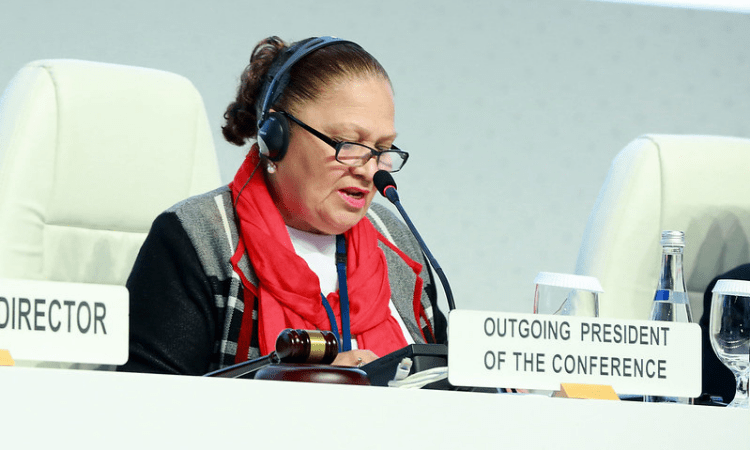 the Biden regime’s State Department (DOS) has been projecting its own corruption onto Guatemalan officials. (UNIS)

Since 2010, the US State Department (DOS) has attempted to impose totalitarianism on Guatemala: a government run by the successors to the militarily defeated, Fidel Castro-backed insurgents.

In response to Guatemala’s assertion of sovereignty to create rule of law, the DOS has accused Guatemalan authorities of accommodating corrupt interests.

Given the loss of court and prosecutorial control, the DOS-led subversion is now at its weakest point in 10 years. To keep the socialist dream alive, the DOS must openly lead the charge. Otherwise, the socialist agenda would be set back for many years.

The Liga Pro-Patria, a nonprofit association promoting rule of law in Guatemala, ended a July 28 statement: “Until the United States lives up to its founding principles and holds its own corrupt officials accountable, the State Department is our public enemy number one.” The Liga was reacting to DOS officials attempting to intimidate Guatemala to reinstate Sandoval, whom the prosecutor general had fired and whom DOS had praised as an anti-corruption champion.

The DOS used the US-Northern Triangle Enhanced Engagement Law (Division FF, Title III, Subtitle F—page 1946) on July 1 to revoke the US visas of 20 Guatemalans. That is the DOS’s right. However, that right does not include arbitrarily declaring people guilty of “undermining the democratic process” and “significant corruption,” such as “bribery and extortion … money laundering and acts of violence, harassment, or intimidation” of investigators.

Prosecutor General Consuelo Porras stood firm against the threat of sanctions and fired DOS darling Sandoval on July 23, after which the DOS turned up the heat. Multiple DOS officials condemned Porras as corrupt and/or acting against rule of law.

In an August 4 statement, DOS said, “The United States is launching a new visa restriction authority as part of our effort to help the people of Guatemala, Honduras, and El Salvador improve their political, economic, and security conditions … With these restrictions, we are sending a clear message that those undermining democracy or the rule of law in Guatemala, Honduras, and El Salvador are not welcome in the United States.”

Honduras and El Salvador have problems. However, their inclusion is likely cover for DOS desperation regarding its loss of socialist control in Guatemala.

The DOS statement is the height of Orwellian newspeak. There is ample public record of Sandoval’s and Porras’s corruption while in office. The same applies to other former officials, such as former prosecutors general Claudia Paz y Paz and Thelma Aldana. These two also did the DOS’s criminal bidding and are now protected in the United States. Porras and Sandoval left Guatemala for the United States on the same day they were no longer in their posts.

The guerrilla successor groups protected by the DOS and NGOs, some financed by USAID and George Soros organizations, called for protests on July 29–30 and August 5–6. They demand resignations from Porras and President Alejandro Giammattei. Rioters have illegally blocked roads and violated Guatemalans’ right to free transit, which sometimes ends in medical tragedies.

With shades of last summer’s so-called mostly peaceful protests in the United States, DOS warnings to US citizens have called the rioters “civic and student organizations.”

The DOS believes and has stated many times that private-sector elites are responsible for Guatemala’s underdevelopment and emigration. The DOS and its allies have accused these elites of paying congressmen and government officials to reject embassy-favored judges and prosecutors.

Guatemalans saw the disastrous results of the DOS’s corrupt high court run by Porras and the corrupt prosecutorial Special Branch against Impunity run by Sandoval. This is the real reason why Guatemala’s authorities have appointed independent magistrates to its high court and why Porras fired Sandoval.

Blinded by ideological biases, the DOS clings to a static explanation for Guatemala’s underdevelopment. Having seen their assets and liberty put at risk by totalitarians, some of the elites are realizing they must change their ways if they want to be free and secure. Those changes are decentralization and market competition based on the quality and price of goods and services within a system of laws based on individualism.

Traditional mercantilists still exist among the elites, although less than before. Most of the elites are afraid to confront the DOS and will bow to it. This is the reason for the new visa restrictions. The DOS specifically targets individuals whose only crime is to legitimately oppose DOS policy, in the hope that intimidated elites will pressure the government to submit to DOS criminality.

The DOS should recognize the new reality and work with the private sector to decentralize and create genuine rule of law, as opposed to the DOS’s Orwellian perversion. Given the low likelihood of a DOS about-face, however, Guatemala will have to realize prosperity despite the DOS. That means Guatemala’s elites overcoming their fears, understanding the DOS as the main obstacle to prosperity and security, and confronting the enemy. The sooner that happens the sooner Guatemala will be successful.