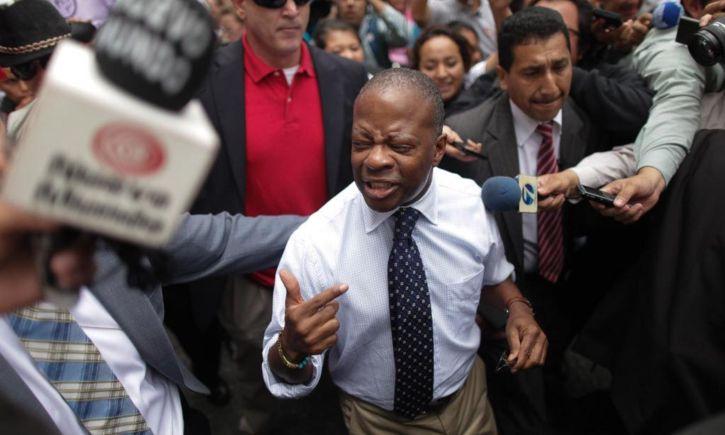 In July 2015, a crowd of Guatemalans demonstrated against Todd Robinson, then US ambassador. (aDiarioGT)

Joe Biden has confirmed his policy is to push migrants from the Northern Triangle to the United States. This is clear from his nomination of Todd Robinson as assistant secretary of state, international narcotics, and law enforcement affairs (INL). Robinson has previously been instrumental in undermining economic opportunity and the rule of law as ambassador to Guatemala and later as senior advisor for Central American affairs.

The core of Robinson’s harm was his coopting of the Constitutional Court (CC), the last word on judicial matters. In 2016, Robinson summoned leaders of Guatemala’s congressional delegations to his residence to have them appoint his Marxist ally Gloria Porras to the CC. Robinson threatened the congressmen with visa cancellations or denials and criminal investigations unless they appointed Porras, who won by a vote of 145-6 in a multicandidate field.

Papal Nuncio Nicolas Thevenin, then the dean of the diplomatic corps in Guatemala, commented publicly: “No country can permit such interference because, far from helping a country in need, it increases tensions.” The archbishop of Guatemala then made it clear the nuncio was referring to the US ambassador.

In a surprising manner for a diplomat, Robinson replied to a reporter asking about the nuncio’s comment: “In the list of priorities, for me sovereignty is last.” He added he was only concerned about the poor. Armando de la Torre, former prefect of studies at the Latin American Seminary in the Vatican, told the Impunity Observer, “In 2,000 years of western history, there has been no other institution that remotely compares to the Catholic Church in efforts to alleviate suffering and human pain. The statement of Obama’s ambassador is an insult to hundreds of millions of Catholics who try to help the least fortunate.”

Robinson also played a visible role in attempting to change Guatemala’s constitution in 2017. The proposals he pushed would have removed Congress and the Bar Association from appointing magistrates and provided for magistrates to name their own successors.

A leading opponent of this effort, Congressman Fernando Linares, told the Impunity Observer Robinson had “been overtly involved in pushing this legislation. He has had members go to the embassy and threatened them with investigations unless they support [the changes].” In a local interview, Robinson said, “Some congressmen and parties have not learned, and maybe we need to see more of them in prison so that they learn.” He tweeted the interview.

In the 2016 documentary From Hillary with Love, Linares explained: “[CC] magistrates have told me [Porras] tells them what she wants them to do and how to vote, since she has the support of the US ambassador.” After having taken over Guatemala’s court of last resort through Porras, Robinson then pushed to leave the same people in charge of naming their successors.

After narrowly losing the vote to change the Constitution, Robinson had Linares’s US visa revoked. Shortly afterwards, Linares’s son, a member of the South Carolina National Guard, suddenly died at 27 years old. Linares asked for a special dispensation to attend the funeral, but US officials denied him a visa. This was an inhumane, intimidating message to other members of Congress and government officials.

Robinson’s interference included making his own policy in defiance of his superiors.

After Guatemala, the State Department posted Robinson to Venezuela. In the run-up to the 2018 Venezuelan presidential election, the Trump administration rightly condemned it as illegitimate. However, Robinson stated, “Venezuelans will decide whether the elections are credible or not, and we will wait for the decision of the Venezuelans.”

Reacting to Robinson’s insubordination, Senator Marco Rubio (R-FL) said, “There’s been no change in the policy of President Trump.… What could change is the head of the US embassy in Venezuela.”

Robinson’s next appointment, as senior advisor for Central America, occurred later in 2018, just after the International Commission Against Impunity in Guatemala (CICIG) had come under Helsinki Commission scrutiny. Various US senators and representatives spoke out against the CICIG’s illegal actions in Guatemala. Rubio placed a hold on $6 million for the CICIG. Ignoring Rubio and the Trump administration, Robinson told a Guatemalan newspaper, “There is no risk we will not continue supporting the CICIG.”

Despite polls showing almost 90 percent of Guatemalans oppose same-sex marriage, Robinson hung the LGBT flag at the US embassy. Regardless of one’s position on the matter, Guatemalans had every right to feel the United States was attempting to impose a social agenda.

Robinson acted as proconsul of Guatemala, treating its people with contempt, imposition, and intimidation. Through his control of the CC and the CICIG, Robinson protected the successors to the Fidel Castro-supported guerrillas. They force people to commit crimes against businesses and authorities, causing loss of opportunity and increased violence, especially along the borders.

Robinson was thus largely responsible for the lack of state presence along the borders, which facilitated narcotrafficking. If confirmed for the INL position, he will impose the same agenda that resulted in increased migration and narcotics flow above his new duties. The Senate should deny Robinson’s confirmation.