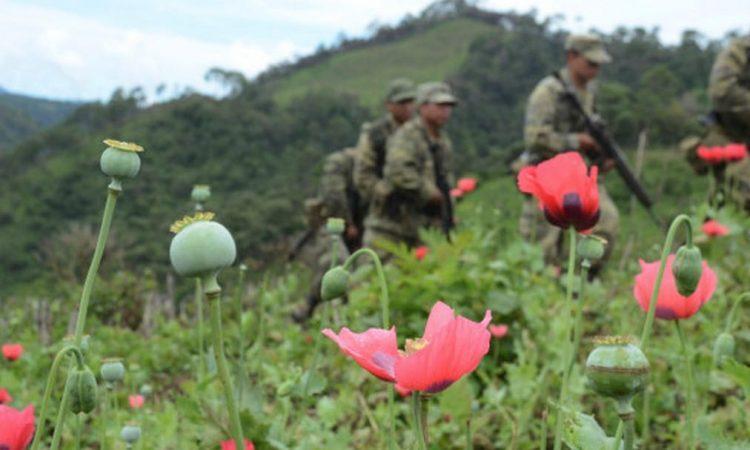 The Mexican government is already on its way to eradicating opium production. (@serfer6)

The flow of illegal immigrants and contraband — drugs and military-grade weapons — requires immediate attention to our neighbors to the southwest and a new approach to foreign relations.

President Trump has launched a commission chaired by Governor Chris Christie (R-NJ) to address the opioid addiction crisis and “vowed to step up efforts to stop drugs from being smuggled into the U.S.” William Brownfield of the Bureau of International Narcotics and Law Enforcement Affairs has estimated that “As much as 94 percent of the heroin entering America comes from Mexico.”

Mexico is one of the world’s largest growers of poppies, but it has an aggressive air-eradication program. In 2015 they destroyed 25,960 hectares of plants, almost the entire estimated 28,000. In contrast, the Obama policy in Guatemala, which undermined the rule of law, led to open and expanded poppy-growing.

An anti-narcotics expert, speaking on condition of anonymity, says “When the successful US-government interdiction and poppy field eradication contract in Guatemala ended in 1996, the average poppy field was about half an acre. Now there are fields many times larger, and some are visible from roads, due to the lack of an aerial interdiction program and abandonment of rural areas to armed political groups.”

Smugglers send opium, a poppy derivative and precursor to heroin, from Guatemala to Mexico for processing. They also move heroin from Colombia, another UN-identified production hotbed in Latin America. As with underground persons and contraband moving by land, heroin passes through Guatemala to Mexico because of the 595-mile porous border.

The Trump administration will likely succeed in working with Mexico on poppy eradication, but it cannot afford to ignore Guatemala as a production point and gateway for Colombian production.

The mishandling of Guatemala by the Obama administration began from the start. His officials illegally intervened to install and protect the successors of the Fidel Castro-supported insurgents in Guatemala’s armed conflict (1960-1996). Hillary Clinton had an attorney general removed and replaced by guerrilla sympathizer Claudia Paz y Paz. She then spread conflict throughout Guatemala by supporting illegal armed groups and persecuting legitimate law enforcers. Even after leaving office, Clinton pressured then-President Otto Pérez to reappoint Paz y Paz.

When that failed, Obama opened the US border to a wave of underage migrants. He released them into the general population and obtained $750 million from Congress for the Alliance for Prosperity, to “address the key factors … contributing to the migration of unaccompanied, undocumented minors to the United States.”

The election of Donald Trump caused panic among the collectivist radicals, since they risk losing control of Guatemala and being exposed as oppressors of the poor and defenseless — the rural indigenous peasants. To prevent this, the radicals — with Robinson, Velásquez, and Aldana at the helm — have used their control of criminal prosecution and US visas to pressure Guatemala’s Congress to change its Constitution. The proposals violate terms of the Alliance for Prosperity, give the radicals more control over the judiciary, and complicate any change to Obama’s policy.

If the government of Guatemala were to properly enforce the law, local populations would gain economic opportunities, suffer less violence, and tend to remain in their homeland. They would cooperate with security forces to counter illegal immigration and contraband through their territories and facilitate poppy eradication.

Part of the radical resistance to Trump is to portray the Obama policy as effective in combating corruption, including narcotics trafficking. Congressional allies, such as Senator Patrick Leahy (D-VT) and Representative Norma Torres (D-CA) have portrayed Velásquez and Aldana in this manner.

They can point to a few high-profile interdictions, Justice Department indictments, and extraditions. Meanwhile, however, Robinson, Velásquez, and Aldana have protected criminal organizations, such as the Committee of United Campesinos. These groups suppress rural populations and attack development projects and legitimate authorities — opening the door for extortion in urban areas and drug trafficking — greatly outweighing any successes they can cite.

Homeland Security Secretary John Kelly has voiced his concern about terrorism coming “through the southwest border.” Senator Marco Rubio has said the Venezuelan crisis “raises the possibility that (President Nicolás) Maduro could lose control over dangerous weapons systems.” The open passage through Guatemala, assured by Obama’s policies, provides a convenient land route for them and for illegal drugs and illegal migrants.

Immediately changing the Obama policy in Guatemala is urgent for our protection.