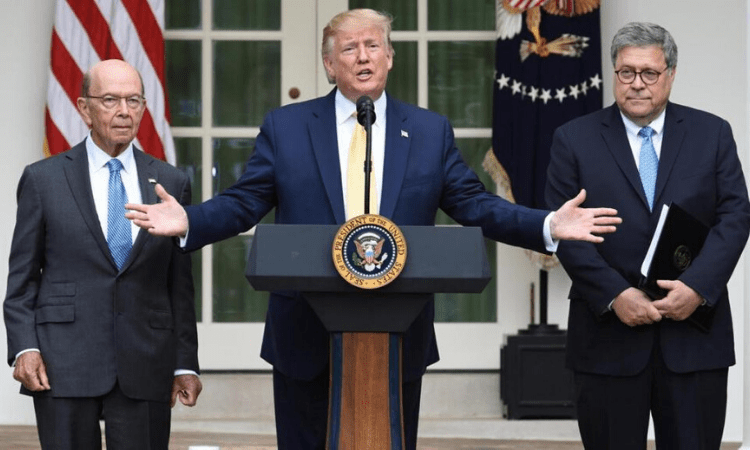 Secretary of Commerce Wilbur Ross (right) will lead a high-level delegation to the inauguration of Alejandro Giammattei as president of Guatemala. (DeluxeFile)

The White House announced on January 8 that Secretary of Commerce Wilbur Ross will lead a high-level delegation to the January 14 inauguration of Alejandro Giammattei as president of Guatemala. The other members of the delegation are Chad Wolf, acting secretary of Homeland Security, Adam Boehler, CEO of the US International Development Finance Corporation, and Ambassador to Guatemala Luis Arreaga.

The Iranian crisis and the January 13–15 visit to Washington by the vice premier of China regarding the US-China trade deal has kept Vice President Mike Pence and Secretary of State Mike Pompeo from attending the inauguration. Even without them, the composition of the delegation shows the importance the Trump administration places on security and development in Guatemala.

Guatemala is the key country for the flow of migrants to the United States because its 595-mile border with Mexico is the only land route from South and Central America. Poverty and violence have been pushing Guatemalans to migrate, while a lack of state presence in the border areas opens the door for anyone to traverse Guatemala.

On July 26, 2019, Guatemala and the United States signed an agreement whereby migrants claiming asylum at the US southern border would be offered asylum in Guatemala. The agreement was the first of its kind in Central America. The Trump administration views it as a great help in reducing the number of alien arrivals.

Concurrent with the asylum agreement, the Trump administration offered an improved guest-worker program for Guatemalans. Those who use it will avoid the costly and dangerous trip through Mexico. Their earnings will help them, their families, and Guatemala.

The guest-worker program somewhat reduces illegal migration, but violence and lack of opportunity push more people than the program can absorb. Around 200,000 people enter the Guatemalan workforce each year. Guatemala requires about $2 billion annually in investment to provide jobs for them, but investment is nowhere near this amount.

The Obama administration bullied Guatemala into placing allies of the successors to the Fidel Castro-supported guerrilla into the public prosecutor’s office and the judiciary. They, in turn,  protect groups that invade private property and destroy businesses. The policy, led by Arreaga, continues under Trump.

Although normal for an ambassador to be part of an inaugural delegation, Arreaga’s presence clashes with that of the head of Homeland Security. The message to Giammattei is he must work with Arreaga, which means a continuation of the policies that have brought Guatemala to its knees.

Arreaga tried and failed to derail the asylum agreement. On July 13, 2019, the day after the White House announced Guatemalan President Jimmy Morales would arrive to meet with President Trump, Guatemala’s Constitutional Court (CC)  issued an illegal and contradictory ruling. As a result, Morales canceled the meeting. Trump then told the press the CC had prohibited the agreement, even though it had not.

Arreaga’s predecessor, Todd Robinson, threatened members of Guatemala’s congress to name his socialist ally to the CC. Robinson essentially ran the court as well as the prosecutor’s office. Arreaga picked up where Robinson left off. He and his Democrat congressional comrades are protecting the corrupt magistrates and prosecutors trying to derail the Trump agenda.

After Robinson’s socialist candidate for president lost to Morales in 2015, Robinson began to plan her 2019 victory. Taking over that effort also, Arreaga corrupted the electoral authority while the CC issued illegal rulings to favor that socialist candidate.

On August 8, 2019, House Speaker Nancy Pelosi visited Guatemala. Arreaga arranged for her to meet and be photographed with corrupt socialist judges. The effect was to support Arreaga’s socialist candidate in the presidential runoff and encourage the corrupt authorities to continue their efforts to fix the election for the socialist.

The Democrats want to keep the migrants coming as part of their opposition to Trump. It lets them portray him as an anti-immigrant racist incapable of fulfilling his campaign promise to reduce illegal immigration.

The CC would not have issued its July 13 ruling had Arreaga not wanted it. That Trump mischaracterized the CC’s ruling indicates Arreaga did not inform his boss. This coincides with Arreaga’s public record of conspiring with Democrats against Trump.

Arreaga’s presence at the inauguration overshadows the positive message of the notables in the delegation. It encourages his socialist allies to continue to pressure Giammattei and impede him from bringing development to Guatemala. Trump should remove Arreaga immediately.