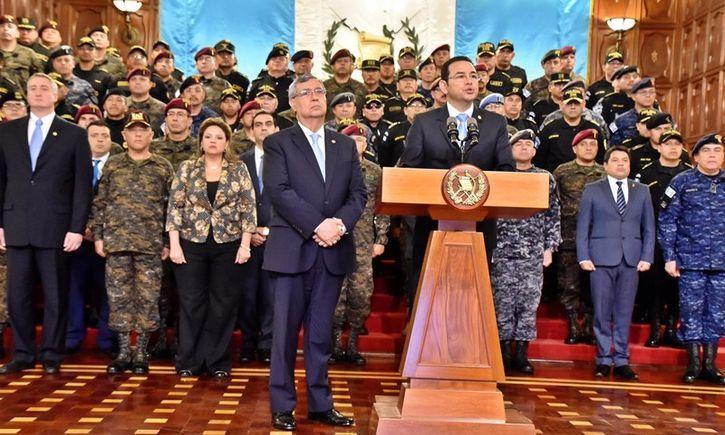 President Jimmy Morales made the announcement on national television on Friday, August 31. (AGN)

Instead, the president announced his administration would not renew the CICIG mandate when it expires. This leaves Velásquez and his judicial-branch enablers untouched to continue their judicial terrorism until September 2019, when the CICIG’s mandate expires.

This wasn’t good enough for the international and local media. Immediately reacting to any criticism of the CICIG, they became propaganda organs for globalists seeking to take power in Guatemala, showing no awareness of the underlying issues.

For the media and other CICIG supporters, the commission—which is unaccountable and unaudited—is indispensable for the fight against corruption. For them, there is a binary choice: purity with the CICIG, corruption without it—the rule of law and democratic principles be damned.

In his press briefing, Morales stated he had informed the United Nation that the CICIG violates the law. The CICIG induces individuals and institutions to participate in corruption in the form of selective criminal prosecution with an evident political bias, causing judicial terror. This has compromised judicial independence and violated the presumption of innocence and due process guaranteed by the Guatemalan Constitution.

In closing, Morales cited the provision of the Constitution that states nobody is obligated to obey illegal orders. A knowledgeable listener would immediately think of the Constitutional Court’s illegal order from one year ago. It reversed the president’s legal declaration of Velásquez as persona non grata that required him to leave the country.

The president should not have obeyed that illegal order then, and he should not obey it now.

A look at the CICIG’s history, such as that published recently by four Guatemalan civic organizations, supports Morales’s characterization of the commission. The report concludes that “The CICIG is undermining the fabric of Guatemala’s freedom. Its actions have been furthering the very kinds of extra-legal, freedom-threatening entities it was called upon to eradicate.”

The CICIG would not be present today in Guatemala without its primary partner, the State Department. Right on cue, the US embassy immediately issued a contorted statement showing its contempt for Morales’s decision and its support for the CICIG.

Right from the outset, the State Department pressured Morales and the Guatemalan Congress. In particular, US officials wanted CICIG allies appointed to the nation’s highest court and to key positions in Morales’s administration.

After a contentious process a few months ago in which the US embassy and CICIG improperly intervened, Morales chose a new attorney general, María Consuelo Porras. Pursuant to the presidential denunciation of criminal activity, she is obligated by law to investigate and take appropriate action.

However, acting outside her mandate and violating the exclusive power of the president to conduct foreign affairs, Porras on Friday issued a statement urging the government and the United Nations to work together toward reconciliation.

The globalist alliance has been working hard to take control of Guatemala, and it has become desperate since the election of Donald Trump as president of the United States. They tried and failed to change the Guatemalan Constitution in their favor. They have tried and, thus far, also failed to remove Morales from office. Their goal is to place one of theirs who would be, unlike Morales, unwilling to work with Trump.

Now the alliance, left with no alternative, is focusing on elections to obtain executive power to go with their control of the judiciary. Unfortunately for them, their candidates have never achieved more than low, single-digit support from the electorate. They cannot win a free election, so consistent with their ends-justify-the-means immorality, they will seek to steal it.

Last month, the CICIG entered into a public agreement with the Supreme Electoral Tribunal regarding the June 2019 general elections. The tribunal has no legal authority to enter into this agreement, and it is outside the CICIG mandate (PDF).

Morales failed to mention this illegal agreement in his press briefing. He did not mention the fate of Velásquez, nor the measures he might take to assure the CICIG criminal activity he cited does not continue to harm his nation.

The State Department will continue to be an implacable foe of Morales. That is unless Secretary of State Mike Pompeo and Trump pay attention and neutralize the globalist careerists who have been imposing their totalitarian allies on Guatemala.

If Guatemala continues to fly under Trump’s radar—while Velásquez remains, the rogue judiciary continues unabated, and the attorney general fails to investigate CICIG criminal activity—Morales’s announcement may come to naught. A stolen election could then enable an ally to renew the CICIG mandate, set to expire in September.

For US interests, the Trump administration must understand it has been undermined by State Department globalist careerists. To promote a prosperous Guatemala capable of reducing the flow of illegal migrants and drugs, Trump must take charge of Guatemala policy and make appropriate changes.

Morales must go beyond his prior displays of resistance and follow through with firm action to break the unholy alliance working against the rule of law in Guatemala.