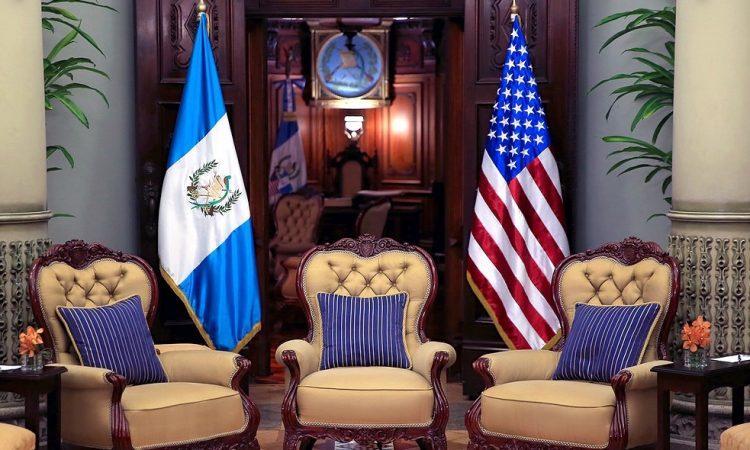 Barack Obama's holdover personnel continue his legacy in Guatemala, along with the CICIG. (Guatemalan Government)

On the same day, also in Miami, Vice President Mike Pence met with Guatemalan President Jimmy Morales to speak about the need for security and prosperity in Central America.

Pence reiterated the US commitment to aid programs; he made special mention of Guatemala’s Justice Ministry, as well as the International Commission Against Impunity and Corruption (CICIG).

Trump and Pence have taken a giant step forward with Cuba. But for their hemispheric policy to succeed, they must first remove the footprint that Obama left in Guatemala.

In Morales, Pence encountered a political novice and surprise electoral winner. Guatemala’s president has now served for over a year without getting his hands on the reins of power.

On assuming the presidency in January 2016, Morales had made very few appointments to his government. He knew the people he wanted for the key Ministry of the Interior, which is in charge of police and law enforcement; but Morales’s candidates were not to the liking of the US embassy or the CICIG.

The CICIG’s mandate is to protect Guatemala from extra-legal organizations that threaten the liberties of its citizens. Tied to US aid and appointed by the United Nations, the CICIG is not supposed to involve itself in routine presidential appointments. As for the US embassy, its mission does not include meddling in a host country’s internal affairs.

Morales’s predecessor had said he saw “no problem” with a key Interior Ministry appointee: Oscar Platero, a retired army officer whose expertise is precisely in breaking up the kinds of clandestine organizations that the CICIG is charged with dismantling.

But Platero was suddenly out of a job. An official spokesman explained that the retired officer did not have a “constructive working relationship” with the CICIG.

Nómada, a progressive website, reported that Morales “opted to cede” the Interior Ministry to the coalition of the Justice Ministry, the CICIG, and the US embassy. Those parties, Nómada said with evident satisfaction, “can rest assured because they have a trusted counterpart” in the new interior minister.

Under Obama, the US embassy in Guatemala was an outpost of radical activism. That statement especially applies to the current ambassador, Todd Robinson, an Obama holdover who today acts as if he were representing the views of the Trump administration.

With help from Obama’s three US ambassadors and Guatemala’s Justice Ministry, guerrilla militias have taken the place of legitimate authorities and extended their rule across much of the countryside. Those militias descend directly from guerrilla groups trained and financed by Fidel Castro; their partisans have been working for decades to overthrow Guatemala’s constitutional republic.

The militias, whom we have personally encountered, are agents of impoverishment and destitution. Their rule is brutal, and unopposed. Local police, who take their orders from the Interior Ministry, say they are powerless to act against the militias or to protect the populace from them. According to the UN high commissioner for refugees, the US has seen a nearly five-fold increase in asylum seekers from Guatemala, El Salvador, and Honduras since 2008, on account of “surging violence.”

The rule of the militias in rural Guatemala is an obvious barrier to the Trump-Pence program for greater security and development. Taking them out would reduce the flow of illegal immigrants and drugs to the United States, but Ambassador Robinson protects the militias. After Trump’s accession, Robinson had the cheek to announce — clearly without Washington’s okay — that “nothing will change” in US policy.

In his meeting last week, the US vice president was not really talking to Guatemala’s president. The man on the other side of the table, in effect, was Trump and Pence’s own ambassador.

An opponent of the Obama policy in Cuba and Guatemala is Cristy López, whose Cuban parents fled Castro’s regime in the 1960s. Every Wednesday, López and other women of the protest group “Guatemala Immortal” flood into the spectator gallery at Congress, which under pressure from Robinson is now passing measures that will put the country’s judiciary into the hands of the country’s radicals.

“It is ironic and sad,” López said, “that we have needed to dress in white, like the Cuban Damas de Blanco to go to the Congress and openly oppose changes that leftist groups linked to Castro are trying to impose on Guatemala with the help of the United States.”

If Trump and Pence hope to have a positive impact in Central America, they must undo Obama’s legacy, a process that begins with recalling Ambassador Robinson. Otherwise, the insecurity in the hemisphere and lawlessness on the southern border will worsen rapidly.

David Landau contributed to this article.