William Popp on Top of Guatemalan Judges
Skip to content 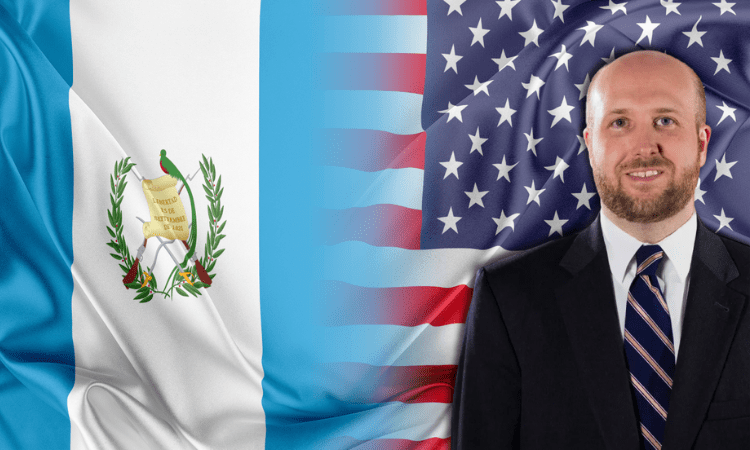 After aggressively intervening but failing to prevent the reappointment of Consuelo Porras as prosecutor general this year, the State Department (DOS) has assumed a low profile. That changed on September 23 with Ambassador William Popp’s illegal address to an assembly of judges organized by the Guatemalan Association of Judges for Integrity (AGJI) and Citizen Action.

The Vienna Convention on Diplomatic Relations obligates the ambassador to coordinate contacts with public officials through the Ministry of Foreign Relations. Leaving this aside, DOS’s and Popp’s history of meddling in Guatemala’s internal affairs confirms the nefarious nature of his address.

DOS abused power in 2010 to illegally reverse the process that had resulted in the appointment of Conrado Reyes as prosecutor general. The purpose later became clear: to install guerrilla sympathizer Claudia Paz y Paz in the post. She committed numerous crimes as part of her and DOS’s ideological, anti-business, anti-liberty, collectivist agenda.

In 2014, despite US pressure, Paz y Paz’s crimes kept her from reappointment. Using the criminal UN commission CICIG as a battering ram, the DOS co-opted her successor, Thelma Aldana, to do its bidding. Two sources—a judge and a former prosecutor—told me they witnessed former Ambassador Todd Robinson in Aldana’s office giving her instructions. The public record is consistent with these statements.

In 2016, Robinson used the CICIG to force Guatemala’s congress to appoint Gloria Porras (no relation to Consuelo Porras) to the Constitutional Court (CC). The president of Congress was caught on audio saying the orders came in English. The papal nuncio and archbishop of Guatemala condemned Robinson for his interference.

Gloria Porras committed numerous crimes as part of DOS’s agenda. When the seventh CC term ended in 2021, Guatemala’s authorities, having witnessed the devastation of politicized justice, resisted DOS efforts to appoint Porras and others like her for another term. DOS harshly criticized this as corruption.

Also in 2021, Consuelo Porras fired prosecutor Juan Francisco Sandoval, a DOS agent with a public record of criminality. DOS responded with harsh criticism and sanctions against Porras, despite her having offered to clarify why she fired Sandoval, which DOS refused to receive. US peer agencies have praised Porras’s work.

Out in the Open

DOS then began its efforts to keep Consuelo Porras from reappointment, provoking inquiries from US senators and representatives. Porras’s office charged prosecutors and judges with crimes. DOS said these were corrupt prosecutions in retaliation for the defendants having prosecuted corruption. Popp led the efforts against Porras and in favor of DOS’s local agents.

Many criminal complaints were presented against DOS agent Judge Erika Aifán. Former Ambassador Luis Arreaga had Aifán at his residence with other ambassadors to show support for her in 2020 after the Magistrates Association filed a criminal complaint against her. On February 11, the AGJI met at Popp’s residence and elected Aifán as its president.

On March 9, Popp went with Aifán to a hearing in a criminal case against her. Eleven US citizens, including me, sent an open letter to the embassy protesting the ambassador’s illegal action.

Also present for the AGJI February 11 meeting was Heide Fulton, deputy assistant secretary of the Bureau of International Narcotics and Law Enforcement (INL). In Panama on April 19, Fulton met with and praised recipients of the Anti-Corruption Champions Award, created in 2021. One of those was Sandoval, by then a fugitive in the United States.

When Popp addressed the September 23 assembly, his usual rhetoric about judicial independence and rule of law was ominous to DOS’s critics. It was a statement that DOS still plans on subjugating Guatemala to the criminal DOS agenda. Conversely, the judges attending the event understood the US embassy wants them to rule politically for the DOS agenda regardless of law.

Fulton’s involvement in DOS’s agenda becomes clear because her boss, Robinson, is now the head of INL. He acted as proconsul in Guatemala from 2014 to 2017 and apparently is obsessed with subjugating the country to his anti-business, anti-liberty, collectivist agenda.

As proconsul and with the United States as the CICIG’s major contributor and supporter, the CICIG did what Robinson wanted. Aldana appointed Sandoval to head the special branch against impunity, which was created along with the CICIG to serve as its enforcement arm.

Sandoval obstructed a money-laundering investigation initiated by a US Department of Homeland Security referral. For two years, he hid the case from Consuelo Porras, who gave this as a reason to fire Sandoval.

Aifán and Sandoval worked closely together violating many laws in furtherance of DOS’s agenda. The solicitor general filed a complaint against Sandoval for usurping authority by granting the infamous Odebrecht a release. Aifán illegally stopped the complaint. Aifán also defied higher court orders in the case of the Russian refugee Bitkov family. Sandoval was the prosecutor.

The Office for Prevention of Torture cited Aifán for torturing Igor Bitkov. Sandoval filed phony charges against lawyer Moises Galindo. Aifán illegally kept Galindo in jail for four years without evidence and in violation of the law and his constitutional rights.

A Small World of Loyal Leftists

Secretary of State Antony Blinken wrote Sandoval a personal letter of praise, writing by hand, “With appreciation for your leadership.” Robinson was likely behind the letter.

Robinson tweeted a photo of himself beaming with joy with his friend Iván Velásquez, former CICIG commissioner, now Colombia’s defense minister. Velásquez met in September with his Venezuelan counterpart Vladimir Padrino, wanted by the United States for narcotrafficking. These are difficult relations for the head of DOS counternarcotics and law enforcement to explain.

The judges Popp met with should be aware of the above public DOS actions. His September 23 appearance before them is DOS interference in judicial independence. The US Congress should take note.